The keel of the future Turkish Navy Landing Helicopter Dock (LHD) has been laid at the Turkish shipyard of SEDEF (a member of TAIS Shipyards) in Tuzla, Istanbul on 8th February 2018.

The vessel named as TCG ANADOLU (Anatolia) by Turkish Navy.

It is designed by Navantia and based on the Spanish LHD Juan Carlos I and Australian Canberra-class landing helicopter docks.

Turkey’s Undersecretariat for Defense Industries (SSM) announced in December 2013 that it selected Sedef shipyard as winner of its LPD tender and that final contract negotiations with this shipyard could begin. The contract has been signed in 2015 and construction of the vessel has been started in 2016. 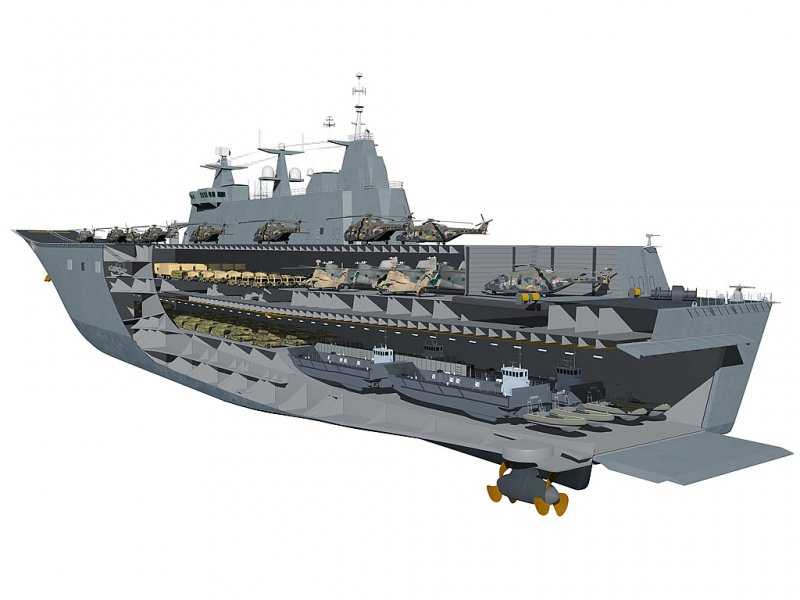 She will have a 5,440m² flight deck and a 990m² aviation hangar which can accommodate either 12 medium size helicopters or 8 CH-47F Chinook heavy-lift helicopters. (When the aviation hangar and the light cargo garage are unified, the ship can carry up to 25 medium size helicopters. Alternatively, the ship can carry up to 12 F-35B and 12 helicopters. Six more helicopters can be hosted on the flight deck of the ship) Additionally, the ship will have a 1,880m² light cargo garage for TEU containers and 27 Amphibious Assault Vehicles (AAV); a 1,165m² dock which can host four Landing Craft Mechanized (LCM) or two Landing Craft Air Cushion (LCAC), or two Landing Craft Vehicle Personnel (LCVP); and a 1,410m² garage for heavy loads, which can host 29 Main Battle Tanks (MBT), Amphibious Assault Vehicles and TEU containers. The ship’s crew will consist of 261 personnel: 30 officers, 49 NCOs, 59 leading seamen and 123 ratings.